Can we transport the Batmobile?

At Nationwide Auto Transportation, we treat every customer with the same care and respect. Although every customer is equally special, some cars truly stand out, as became evident when we were tasked with transporting the Batmobile.

We’ve shipped over a million cars – including some incredible luxury cars, interesting heavy equipment, and immaculate antique cars – in the 15+ years we’ve been in business, and we have learned that each brings its own challenges. That’s why, when our unsuspecting logistics dispatcher asked for the details and dimensions of a specific car when a client requested a quote, he first thought someone was pranking him by posing as a customer wanting the Batmobile shipped from Las Vegas Nevada to Oak Lawn Illinois.

It was an ordinary day in the office, which quickly turned extraordinary when the dispatcher ran into the CEO of Nationwide Auto Transportation, David Edri’s office, shouting “Someone wants us to ship the Batmobile! Can we do it?”

Everything’s impossible until somebody does it. – Batman

David knew that shipping the Batmobile would not only be an honor for the company, but also a great challenge, logistically. His team knows that he would never agree to ship a custom car without first being able to determine that the company had the experience and equipment to make a success of the shipment. 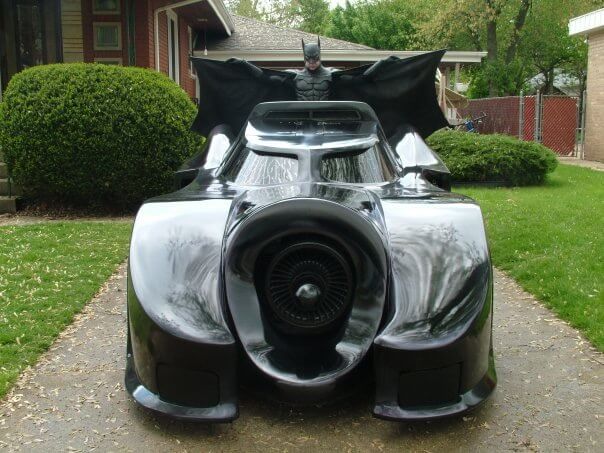 Transporting the Batmobile: What Made This Car Special?

The client found Nationwide Auto Transportation through the company’s online advertising. Having called several auto shipping companies to see if they would transport the 1989 Batmobile, we were his last hope.

This particular Batmobile was the vehicle used in the first Batman movie showed on the big screen, featuring Tim Burton. It was retired after its appearance in Batman Returns, although it continues to draw a strong following as one of the most popular Batmobiles of all time.

Anton Furst was the production designer for the Batmobile and Gotham City, and he wanted the car to combine classic aesthetics with brute force. The custom built body and wheels were powered by a Chevy V8 and two Impala chassis spliced together. Of course, the Batmobile wouldn’t be so special without its many potent gadgets.

From Browning machine guns to spherical bombs, shinbreakers, and disc launchers, it’s truly unique. One of the main features of the Batmobile is the fact that it has a reconfigurable central fuselage which helps it fit through narrow openings. This sounds like a helpful feature when it comes to auto shipping, until you discover that once this Batmissile mode is employed, much of the car is destroyed. It has to be rebuilt…

And that’s probably why all the other auto transport companies declined the request to ship the Batmobile.

It’s not who I am underneath, but what I do that defines me. – Batman

The new owner of the Batmobile wanted the car shipped, as it’s obviously a very special car, and not very new. With a custom-built 1989 car, driving such a long distance could lead to mechanical problems. Also, the owner would not want to put 1752,2 miles of unnecessary mileage on it. Since custom cars often have a preferential mechanic, it’s almost always preferred to ship it, rather than drive it.

In terms of our shipping service, we tried as best as we could to keep our fanfare in check, and handled it as we would any other car that we would move. However, it goes without saying that there were certain shipping logistics that had to be covered prior to transporting the Batmobile. 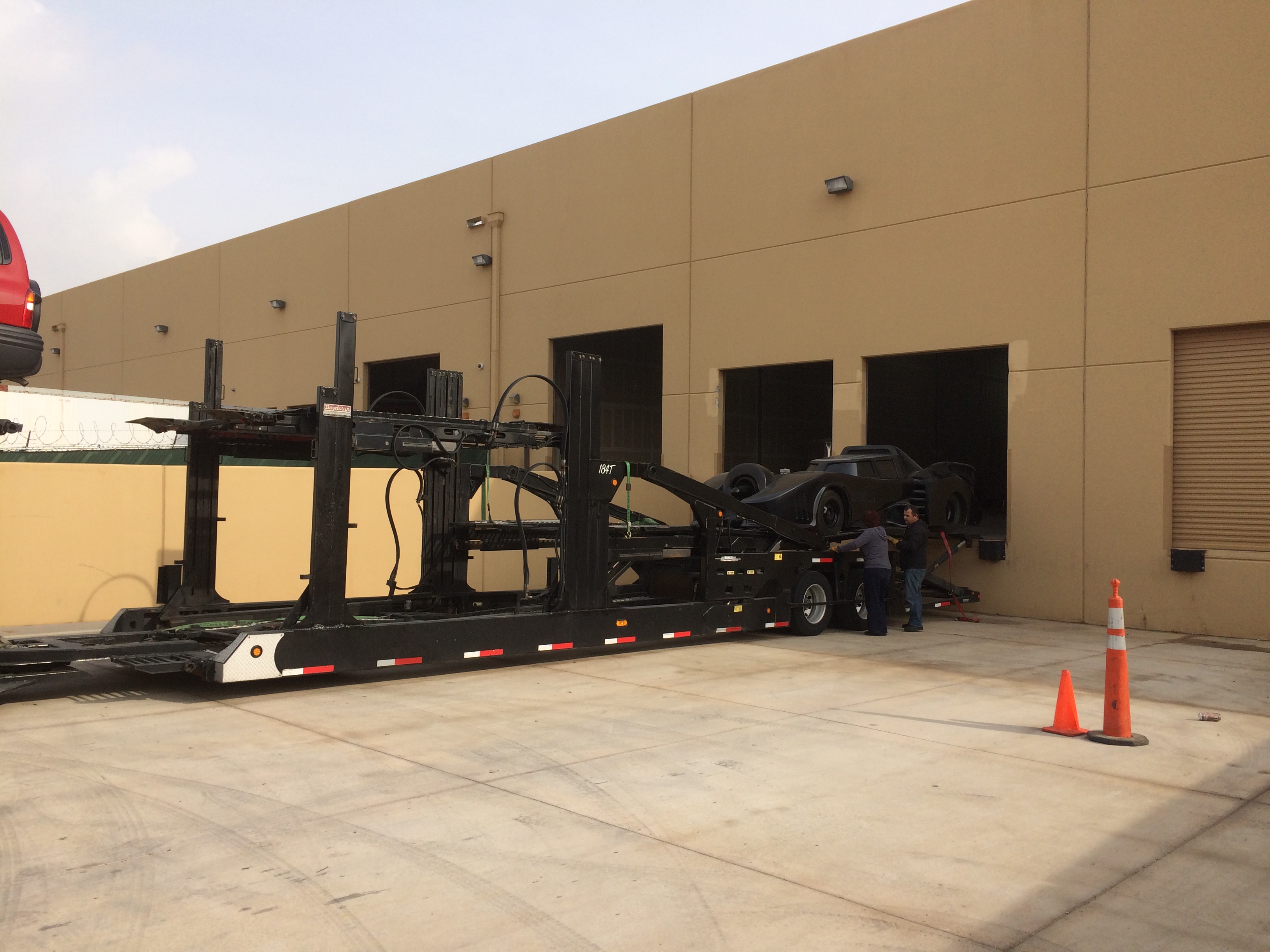 BATMAN HAS NO LIMITS. – Bruce Wayne, The Dark Knight

Thankfully, David’s past experience in operating wreck trucks and running flatbeds, on top of more than a decade of experience running Nationwide Auto Transportation stood us in good stead. He knew exactly what needed to be done to make it happen, and turned his focus to the main challenges of transporting the Batmobile.

As mentioned earlier, we needed to move the Batmobile from Nevada to Illinois. Therefore, we had to find a suitable truck on which to transport the Batmobile.

We usually recommend that expensive custom cars be shipped using enclosed auto transportation trailers. However, due to the width of the Batmobile (and that pesky and destructive – but very cool – Batmissile mode), we could not fit it in an enclosed container on a flatbed. Combined with the link height and low clearance, the best logistical arrangement was to place it on the upper level of an open carrier from the loading deck. 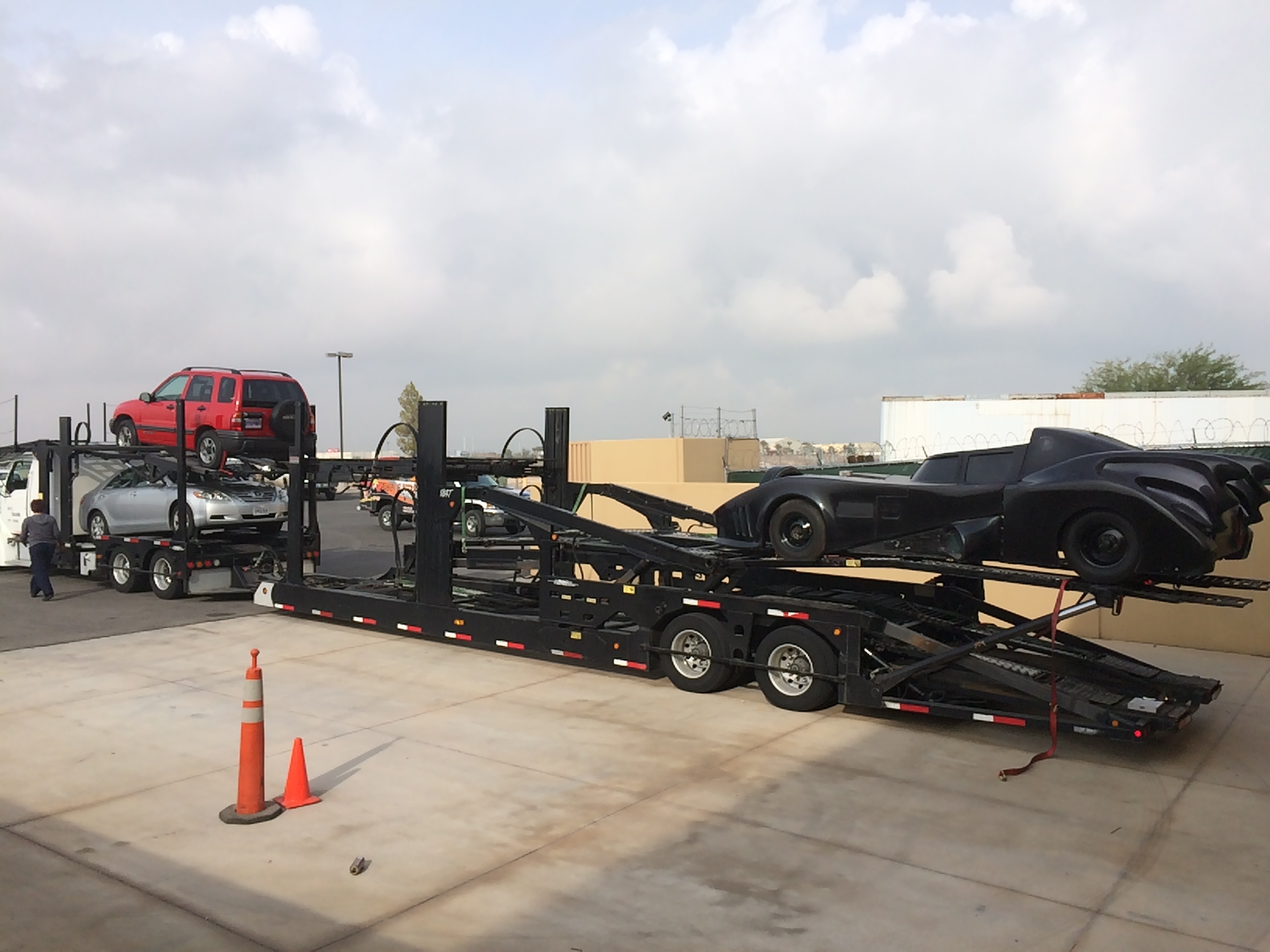 The Batmobile could not be loaded at a high angle, because the rear would be damaged from the bottom. The upper level was best suited to the link of the car, so that’s what we did.

Also, David recommended terminal to terminal transportation rather than our usual door-to-door shipping, as we needed a loading dock to load and offload the Batmobile.

Hitting the Road with the Batmobile

As you can imagine, the 1989 Batmobile drew attention from everyone we encountered on the road. We had to call the customer on the first day to warn him of a potential delay in our estimated delivery time. Why? Because whenever our driver took his compulsory rest stops, people approached the truck, asking the staff to take pictures with the 1989 Batmobile. In some cases, people drove behind us for miles, taking pictures. We had to up our security levels – although everyone behaved really well – to ensure the vehicle was protected at all times.

Thankfully, the new owner of the 1989 Batmobile was gracious, and said we could take our time. At last, we delivered the vehicle safely and without any damage within four days, as per our initial estimate.

The owner was satisfied and very happy to finally have the Batmobile in his possession.

Our superhero driver was relieved that this extremely challenging shipment went off without a hitch, and returned to his life as an ordinary citizen of the U.S. of A. Or perhaps he took Catwoman out for a night on the town…

Who knows what he does in his spare time? 😉

Ready to transport your car with Nationwide?

Our car shipping advisors are available by calling 1800-311-7073 to answer all your questions.

FOR YOUR FIRST ORDER!

Any cookies that may not be particularly necessary for the website to function and is used specifically to collect user personal data via analytics, ads, other embedded contents are termed as non-necessary cookies. It is mandatory to procure user consent prior to running these cookies on your website.